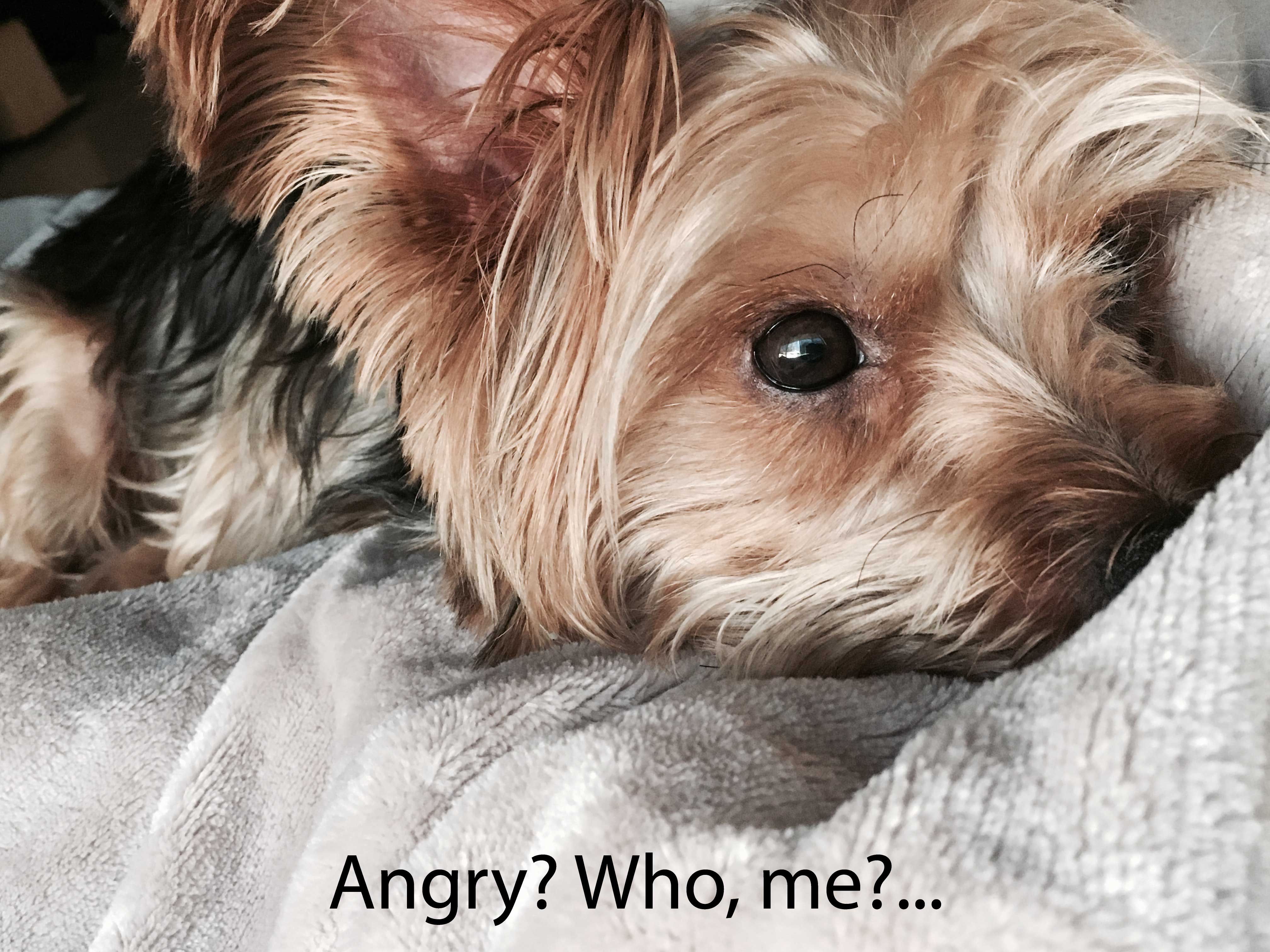 Glorious rain pours down outside my window as I say hello again. It’s been a minute and I apologize! Christmas, New Years, a wedding to plan, school to apply to…I will stop with the excuses…I know you don’t really mind….

The good news?  I feel like there is a bevy of thoughts raring to get out for 2017 and I’m all about sharing them!

This might seem like an odd topic to start off my 2017 post but the Lord has been speaking to me about anger. Odd, honestly. Odder still is that this moment it’s not an emotion I’m experiencing often. Don’t get me wrong, I am no stranger to it. Insert bashful eye blink. Maybe it’s just that at this time, removed from the heavy fog that permeates me during that particular emotion, the root of anger entices me to know more. Stay with me for a second, because you’re going to think I’m cray when I tell you that it was prompted by the behavior of a miniature canine.

My fiancé has a tiny little dog. He is adorable (the dog….although so is my fiancé…) one of those furry friends you want to stick in a purse. At first glance you’d think he was a saint. But try picking him up at dinner time, getting near his toy, or looking at him wrong when he’s tired and Beware! He threatens those tiny pearly whites and he’s not bashful about using them. Before feeding him the other night, I picked him up in front of his dinner bowl and he began growling at me. It was at that moment a thought occurred to me:

“I think he really believes that I’m not going to feed him.”

Which is odd because this pup has never missed a meal! Similarly, when I grab his toy, I think he really believes I’m not going to give it back….which might be true because I thought he liked that game where I take the toy and throw it? ….I digress….

Anyway, if he genuinely thinks I’m going to withhold, of course he is going to assert himself and demand his voice to be heard. I’m not Cesar Milan, so I’m not entirely sure if my suspicions are true with pups, but then a more profound question occurred to me: does anger arise in us because at the core we believe that our needs will not be fully met unless we demand them to be? My therapist would tell you (and I would agree) that anger is almost always a secondary emotion that stems from pain. But in addition, I can’t help but see a connection in anger that manifests in order to somehow defend what we believe we can’t live without, to defend what we should have, or to assert ourselves in a disagreement.   That kind of anger that looks at our neighbor and thinks, “If he got the promotion that means there’s less for me.” Or “ She is so much better at everything than I am. Her talent takes away from mine so I’m going to have to do whatever I can at my job to ensure that I get my own.” The anger that causes us to demand the presence of our flesh because we believe that without doing so, we will be left with nothing. Or maybe it’s that we demand our voice to be heard, because we believe that without shouting, no one will hear?

In the silence of not knowing what is next to write, I hear a small word. A word I don’t like very much.

“Blessed are the meek for they will inherit the Earth.” Matthew 5:5

To put it bluntly: I don’t want to write about meekness. That word sounds weak. Anger was the topic right God? I was supposed to write about how the dog needs to trust that I will feed him, right?

Sigh. Because now I’m off looking up the word meek and pulling out my concordance. Stand by.

….A lump won’t budge from my throat as I read the definition out loud.

Meek; the Greek definition is “praiós” meaning “gentle, humble, meek.” But listen to the explanation that Strong’s Concordance offers.

“Praós is a mildness of disposition, gentleness of spirit. Meekness towards God is that disposition of spirit in which we accept His dealings with us as good, and therefore without disputing or resisting. The meek man truly acknowledges himself as a sinner among sinners and this knowledge of his own sin teaches him to meekly endure the provocations of others and not to withdraw from the burdens their sins may impose on him. The meek are those wholly relying on God rather than their own strength to defend them against injustice. Thus, meekness towards evil people means knowing God is permitting the injuries they inflict, that he is using them to purify His elect, and that He will deliver His elect in His time. Gentleness or meekness is the opposite to self assertiveness and self interest. It stems from trust in God’s goodness and control over the situation. This is a work of the Holy Spirit not of the human will.”

Right after I picked my jaw up off the floor, I thanked God for that last piece at the end, “This is a work of the Holy Sprit, not of the human will.” Well thank God because I can’t seem to find my name in that description whether I’m angry or not…nor do I trust myself to ever get to that place of refinement on my own. The Holy Spirit MUST do that work in me.

(If you want more on how the holy spirit changes us, see “Christianese” blog post).

But getting back to the issue at hand. I think there is something to be said about this disposition in direct relation to anger or rather as an antidote. Not one word is mentioned about fighting injustice or speaking out against it, nor about defending oneself. In fact, the only action we are to do is to trust God. (see also Exodus 14:14)

Trusting??? That seems so….inactive… and yet, as I meditate on that word there’s a new awakening in it. This is a new way of trusting, the action of laying it before the Father and nestling my head in the comfort of His wings, choosing to say,

Oh…and there’s a reward…. the meek inherit the earth…

Not the fighters, the ones who push and demand their way to the front. Nope. It will be the ones who trust God, who choose others over themselves; love over anger; who turn the other cheek.

“Have nothing to do with foolish, ignorant controversies; you know they breed quarrels. And the Lord’s servant must not be quarrelsome but kind to everyone, able to teach, patiently enduring evil, correcting his opponents with gentleness.”

Foolish, ignorant controversies…. I can’t tell you how many times I have looked back on a fight I have had, or a situation I was angry about and was just plain embarrassed because of the foolishness of it. With my face smacked up against my own defense, I couldn’t see the situation for what it was; only the backing of my own self interest.

….Embarrassed. Another blunt remark I must make. My heart beats for deliverance, a race run without the entrapment of such foolishness.

Sweetly washing over me, the Holy Spirit whispers:

“It is absolutely clear that God has called you to a free life. Just make sure that you don’t use this freedom as an excuse to do whatever you want to do and destroy your freedom. Rather, use your freedom to serve one another in love; that’s who freedom grows. For everything we know about God’s word is summed up in a single sentence: Love others as you love yourself. If you bite and ravage each other, watch out—in no time you will be annihilating each other, and where will your precious freedom be then?” (Galatians 5:13-15 The Message, underlining emphasis mine)

Could anger be a symptom of self absorption? Lack of malleability? Could my own anger be blocking me from God’s best because I refuse to allow Him to refine that place? And if that is true, am I allowing the enemy to mess with my breakthrough as I hold tighter and tighter to my “rights?” Furthermore, is anger a warning sign of enslavement to our own flesh? Because friends, we are FREE. Bought and paid for by the blood of Jesus. That’s what the Word says. We are free to trust God wholly with all of our lives, and to love others as we would ourselves. We are free to stay out of entanglement because we don’t need to fight our own battles.

Is this hitting a nerve with anyone else?

The tug between what seems totally illogical and all together a huge sigh of relief?

Today (tomorrow when you read this) is MLK day-a man who knew all too well what the Bible said about meekness and had the courage to live it out. A great example of choosing to live free despite what the circumstance said, and a man who chose love over anger because he said,

“hate was too great a burden to bear.”

…..Sounds like freedom to me.  And I think my pup may feel a bit of that, too.  Again, I’m no Cesar, but I’ve started an experiment.  Everyone who comes in contact with my furry muse has to tell him how ‘loved’ he is, what a ‘good boy’ he is, in an effort to bridge trust and somehow instill meekness….I have to admit: though he still growls….I’ve noticed a shift.  Cesar if you are hiring, I’m available…

As I close I want to leave you with this:

“ It is obvious what kind of life develops out of trying to get your own way all the time: repetitive, loveless, cheap sex; a stinking accumulation of mental and emotional garbage; frenzied and joyless grabs for happiness; trinket gods; magic-show religion; paranoid loneliness; cutthroat competition; all-consuming-yet-never-satisfied wants; a brutal temper; an impotence to love or be loved; divided homes and divided lives; small-minded and lopsided pursuits; the vicious habit of depersonalizing everyone into a rival; uncontrolled and uncontrollable addictions; ugly parodies of community. I could go on. BUT what happens when we live God’s way? He brings gifts into our lives, much the same way that fruit appears in an orchard- things like affection for others, exuberance about life, serenity. We develop a willingness to stick with things. A sense of compassion in the heart, and a conviction that a basic holiness permeates things and people. Find ourselves involved in loyal commitments, not needing to force our way in life, able to marshal and direct our energies wisely.” Galatians 5: 19-23 (The Message)